Migrating From Authy to Bitwarden for 2FA Codes

Many services recommend using Google Authenticator for 2FA. I originally used it before switching to Authy, but I switched for a reason that is still valid today: it doesn't have any sort of backup or syncing functionality.

Check out the reviews to get a sense of how often people get burned by switching to a new phone for whatever reason and realizing they've lost all their codes or need to go through each service one by one and set up 2FA again.

Google Authenticator is also a neglected app. The Android app was last updated on September 27, 2017, and the iOS app was last updated on September 12, 2018. You could argue that these are relatively simple apps that don't need frequent updates, but take a look at what other apps like andOTP and Aegis offer in terms of functionality that Google Authenticator doesn't have, like being able to search for a service instead of having to scroll though the entire list to find it.

While I have happily used Authy for several years, I also have some issues with it that caused me to look for a replacement.

Authy doesn't have a browser extension for Firefox, my primary browser. This is a problem because an extension can offer some protection against phishing, one of the main security weaknesses of using TOTP for 2FA. If the extension fails to find an entry that matches the current domain, that can alert me to a possible phishing attempt.

The Chrome extension also hasn't been updated in two and a half years and will no longer be supported going forward.

Authy doesn't have a web client. While this could be considered a security feature, I'd rather have the option to access my codes through any browser in an emergency. It's a security vs. usability tradeoff that I'm willing to make.

Authy doesn't have a CLI client. I have some ideas for personal browser automation projects that could be easier to implement with programmatic access to my TOTP codes.

I use the Mac desktop program, but when it has a code open, the program uses significantly more CPU. Here's the CPU usage when it's just displaying the list of services. 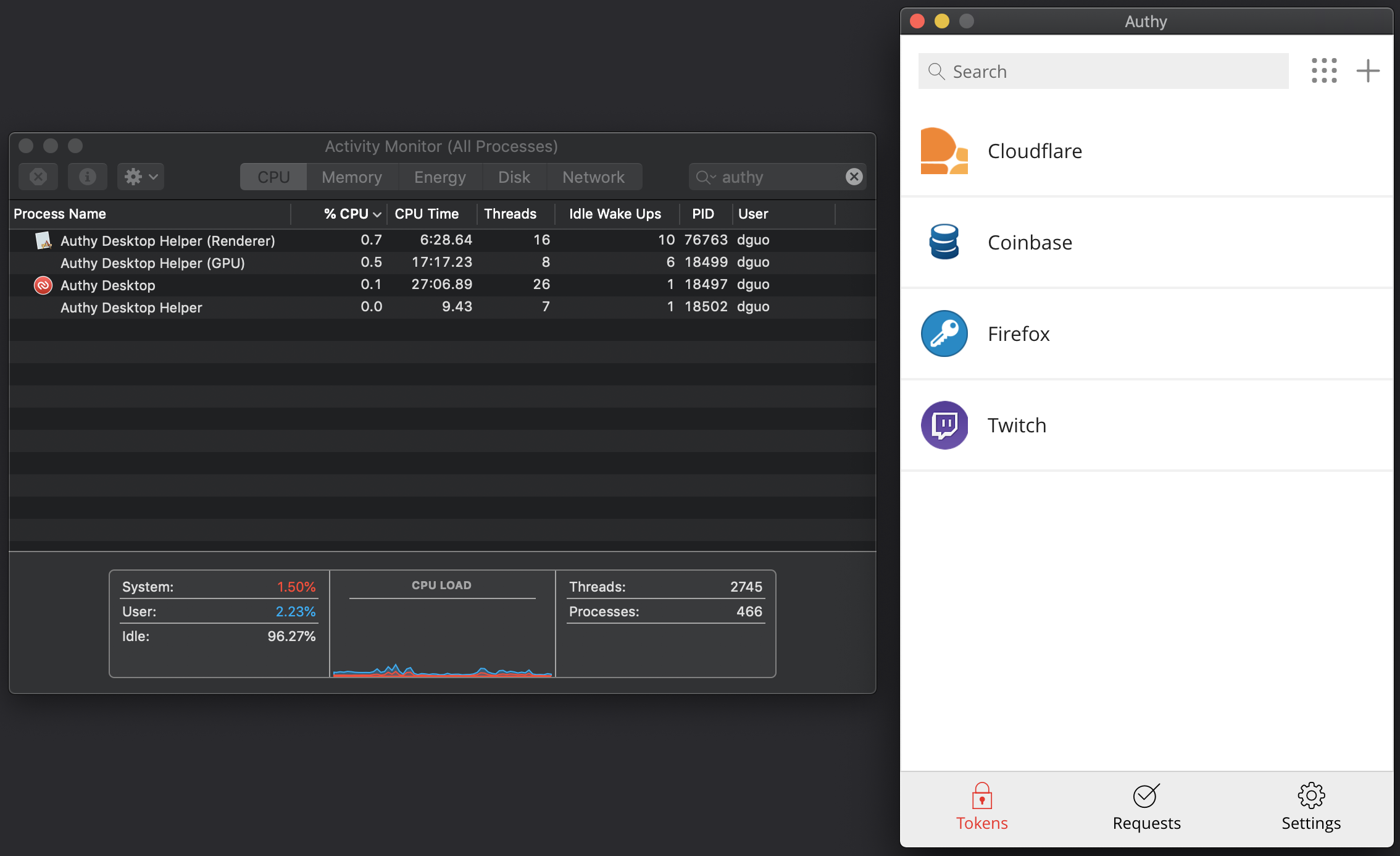 And here's the CPU usage when it's showing the TOTP code. 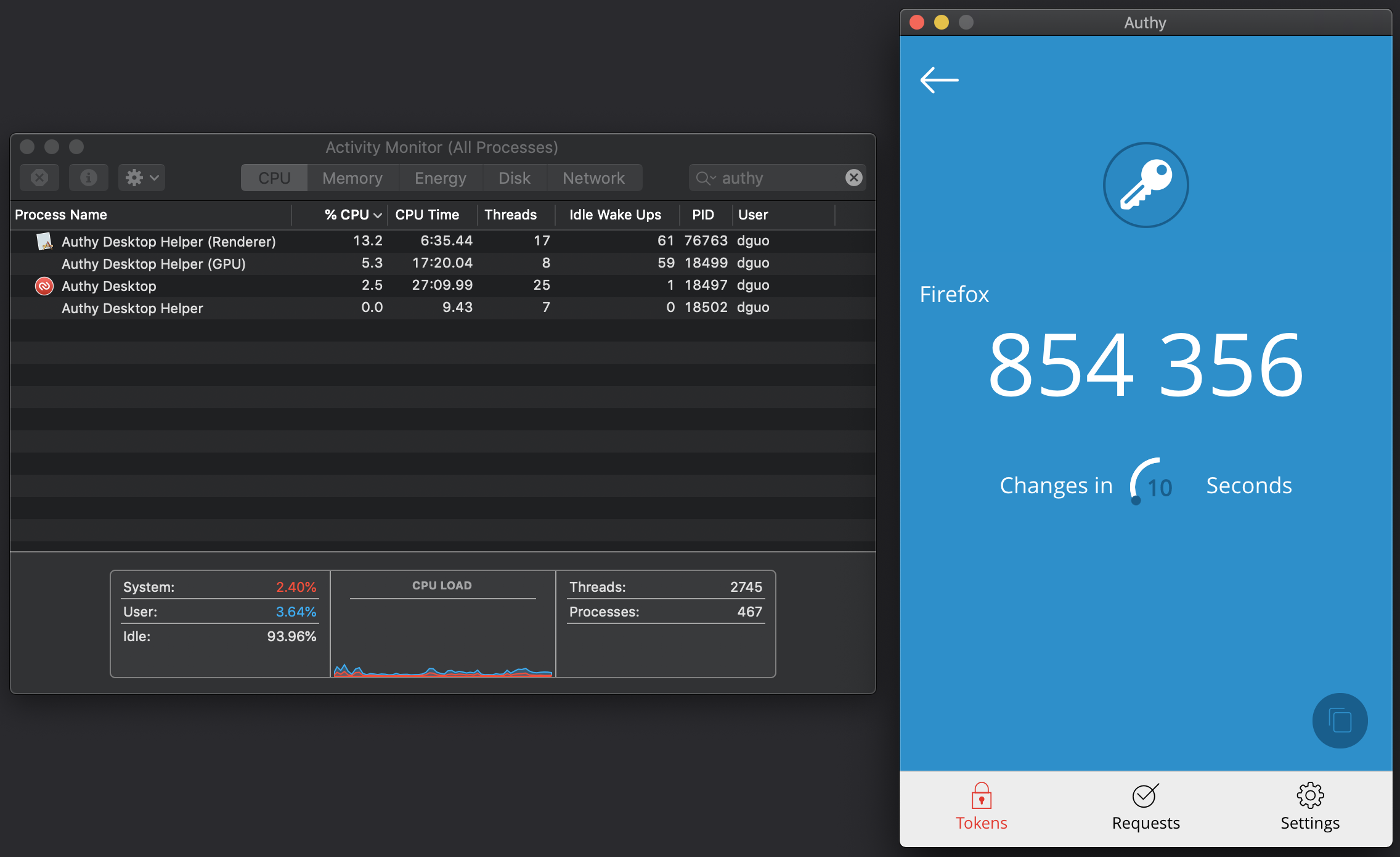 Since I don't want the program to unnecessarily drain my laptop battery, I try to remember to press the back button after copying the code. There's no option to automatically go back on copy or to just copy the code from the list view without even seeing the code.

When you create an Authy account, you have to provide a phone number rather than an email address or username. I didn't like this to begin with since I want as few things tied to my phone number as possible, given how often phone numbers get hijacked.

Authy then encourages you to add the app to your other devices and then disable the multi-device feature. This means that your codes will keep working on your existing devices, but to add Authy to a new device, you need access to one of your old ones to temporarily re-enable multi-device and to grant access to the new device. If you don't have access to an old device, you have to go through a 24 hour account recovery process.

However, I want to be able to regain access to my 2FA codes, even if I've lost access to all my devices. For example, I could be in a foreign country without my laptop and then lose my phone. I want to have a good contingency plan for this kind of situation.

I considered using my YubiKeys to generate TOTP codes using Yubico Authenticator, but a YubiKey can only store 32 TOTP secrets, and I already have 49 of them since I enable TOTP-based 2FA whenever possible.

I currently use LastPass to manage my passwords, but I am going to switch to 1Password soon. I decided to use Bitwarden as well but solely for TOTP codes. 1Password can also handle TOTP codes, but I am willing to deal with the hassle of having two password managers to avoid using the same service for both passwords and 2FA.

By using a password manager for TOTP, I get broad cross-platform support with a web client, browser extensions, desktop programs, mobile apps, and even a CLI client. I also get standard authentication mechanisms, including 2FA support.

This does mean that I am treating my TOTP codes more like secondary passwords (something I know) rather than as something I have. Authy's requirement to have access to an old device better fits the latter principle. This is a deliberate choice on my part.

U2F support is the last component of my authentication strategy. Going forward, it will be like this: I'll store passwords in 1Password and TOTP secrets in Bitwarden. I'll use separate, high entropy master passwords that will only exist in my head.

1Password requires a secret key in conjunction with the master password in order to log in on a new device. Since I can't memorize it, I plan to store my secret key as a static password on my YubiKeys. This means that if I touch the metal contact for a few seconds, it will type out the secret key for me.

For both services, I'll add all my YubiKeys for 2FA. This means that all I need is one of my YubiKeys (one of which is on my keychain) and the master passwords in my head to regain full access to all of my accounts.

However, I can't guarantee that I'll be able to use my YubiKey on every device. For example, Bitwarden doesn't support U2F in its mobile apps. I would also be paranoid about feeling like I need two YubiKeys when I travel in case I lose one.

My plan to deal with these issues is to also set up TOTP-based 2FA for both 1Password and Bitwarden. I'll print those TOTP secrets, along with the 1Password secret key, on a small card and laminate it. I can make multiple copies to put in my wallet and my bag. Sometimes being overly prepared is fun in itself, even though it might be overkill.

To migrate to Bitwarden, I went through my Authy list one by one. In theory, I'd be able to just copy the TOTP secret to Bitwarden, but Authy doesn't expose the secret.

For each account, I logged in and reset 2FA to add the secret to Bitwarden. Then I deleted the account from Authy. Authy marks it for deletion and then waits 48 hours before actually deleting it in case you made a mistake. 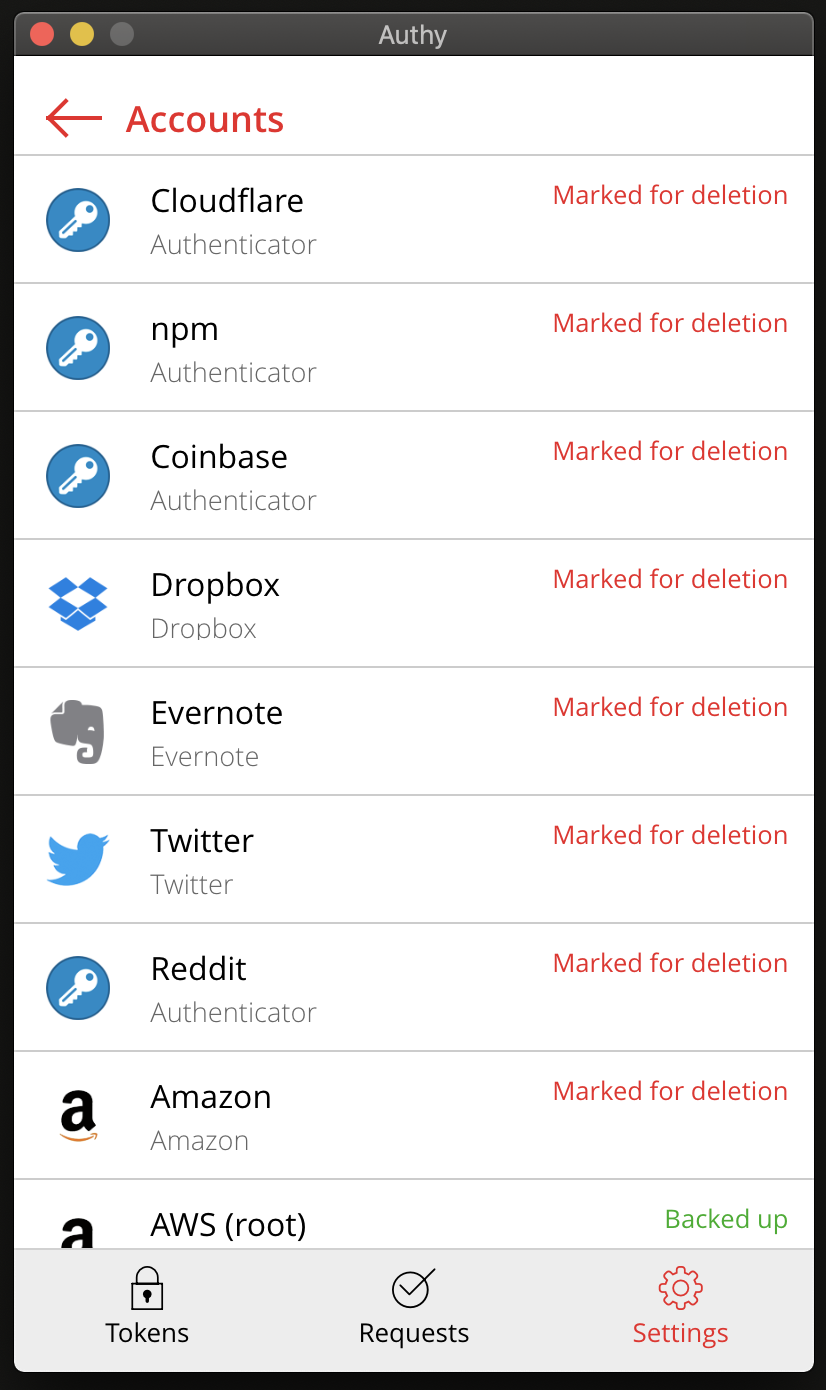 I did have trouble with adding some services, such as Algolia and npm, that only show the QR code and don't have an option to display the TOTP secret. The QR codes encode URIs that look like this, as documented in the Google Authenticator wiki:

I tried using my phone camera's built-in QR scanner, but I couldn't see the full URI and opening it would open Authy, with no other option. I used Google Lens instead to grab the secret. In retrospect, I was only having trouble because I was adding the services to Bitwarden through the browser extension. I should have installed the mobile app from the beginning and used that because it has an option to scan QR codes.

I also had trouble with adding Twitch, which has a specific integration with Authy instead of providing a generic QR code. To get around the issue, I followed this guide. You can use the deprecated Authy Chrome app to retrieve the TOTP secrets and configurations. This method entails using Chrome's developer tools to execute custom code to print the information.

At this point, I thought I hit a Bitwarden limitation because I mistakenly assumed that the extension would only take the TOTP secret in the authenticator key field. 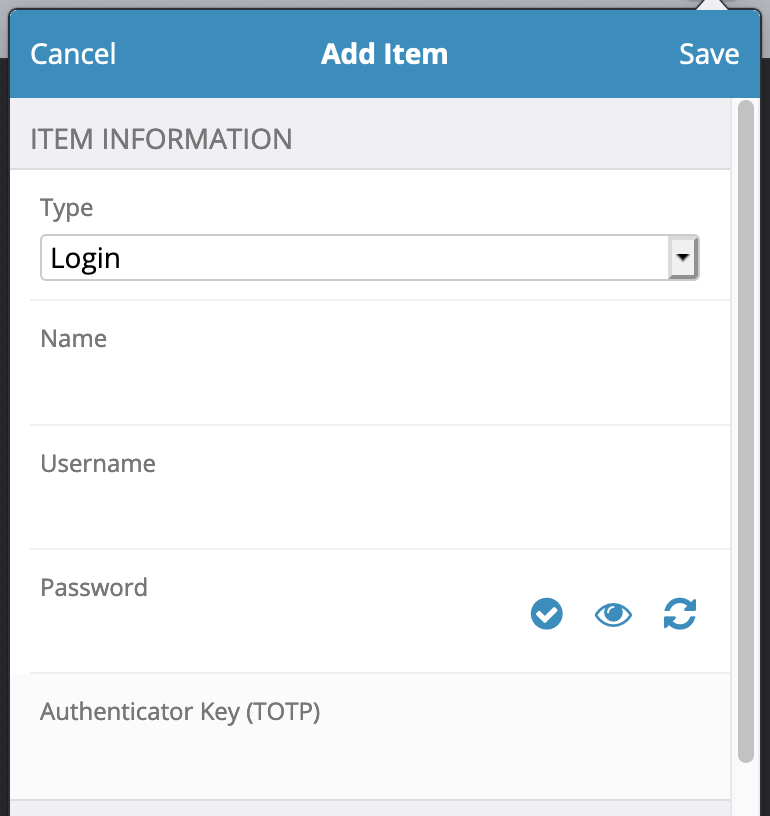 However, I discovered that Bitwarden supports putting the full URI with configuration into that field. I tested it and was able to log in to Twitch using the code generated by Bitwarden.

Migrating to Bitwarden took me about a full day, but I'm happy with the result. I've been using the Bitwarden browser extension to log in to accounts for the past week, and it is much nicer than using the Authy desktop program. Next up is migrating from LastPass to 1Password.