The Decline of the MacBook Pro

I've been using Macs for almost nine years. I got a 15" MacBook Pro the summer before my freshman year of college through my school's computer store. I used it for six years before getting a 13" model in 2015. I'm considering getting a new one in the next year or two, but the latest MacBook Pros have become worse in many ways that are important to me. While it's hard to generalize from my opinions, I've read a fair amount of discontent on Hacker News and the r/apple subreddit. Some people are seeking out used or refurbished 2015 machines.

MagSafe was always one of the best MacBook features. Now, all the MacBook Pro models use USB-C for charging. While I like the idea of eventually being able to use the same charger for everything, losing MagSafe is still unfortunate.

Apple has been enthusiastic about pushing forward with new standards and embracing a wireless world. They dropped the DVD drive long before other companies did. But I didn't want a DVD drive, even in 2015. USB 3 and HDMI are different. MacBook Pros only have USB-C ports now. Not having a single legacy USB port may be progressive, but I don't like the idea of buying and carrying around dongles and adapters. The built-in HDMI port on my 2015 machine has been useful since HDMI is so widely supported. At this point, I just hope they don't drop the headphone jack like they did for iPhones.

I've tried the new butterfly mechanism keyboard, and it feels terrible. The keys barely move. I love the physical feeling of typing, which is why I use a mechanical keyboard with obnoxiously loud switches. The new keyboard also seems to be less reliable, with pieces of dust or debris causing keypresses to not register. Apple is facing a class action lawsuit over the issue.

The trackpad is too big. Even one palm rejection failure in a hundred is too much. I set my sensitivity to max anyway, so a larger trackpad doesn't help me because I can go from one edge of the screen to another with barely any finger movement.

I also think the trackpad is aesthetically too large because there's almost no margin between it and the keyboard and the edge of the laptop. One of the reasons many terminal emulators and older websites look ugly is because they don't have enough margin between elements. The MacBook Pro trackpad is ugly for the same reason.

The touch bar doesn't seem useful. I don't mind the digital escape key, since I remap my caps lock key to escape (when tapped) and control (when held down) anyway, but I would rather use keyboard shortcuts than look down at the touch bar. At home, I also put my laptop on a stand, so reaching up for the touch bar would definitely be slower than using my mouse.

I've realized that almost all of the macOS software is effectively bloatware for me. 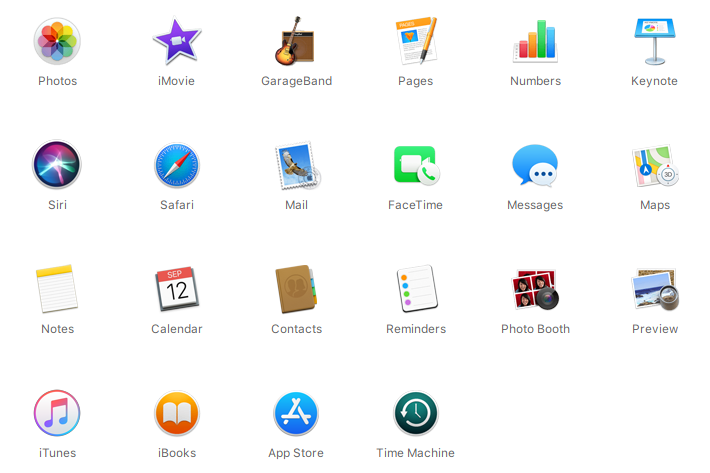 The overarching problem with macOS programs is that they are tied to Apple hardware, and they don't have web versions. I want my software to be hardware-agnostic (update: Anais Wall pointed out in the comments that iCloud does have web versions for some Apple software).

One big reason to buy into Apple's ecosystem is their pro-privacy stance, but that's not compelling enough for me yet. While I don't want to be so reliant on Google services, I'd rather use software from a variety of companies anyway. Todoist is better than any similar product that Apple or Google has produced, and I'm always on the look out for new solutions in established categories.

I try to do as much software development as I can in Docker. However, there are significant performance issues with Docker for Mac when using mounted volumes. The issues aren't very noticeable for small projects, but for working on a medium-sized website, I do all the development on Linux on a five year old Lenovo laptop. If I could only fix one issue with using Macs, it'd be this one.

I'm considering getting a Lenovo ThinkPad X1 Carbon instead and running Arch Linux on it. The X1 has USB-C ports but still retains legacy USB and HDMI ports. It's about a half pound lighter than the 13" Macbook Pro, yet it has a 14" screen. It even has a matte screen option that I would prefer. Rather than a touch bar, its uncommon feature is a physical webcam cover, which I actually want.

The main thing holding me back from switching is the fact that I want to learn how to develop mobile apps, and a Mac is basically required for iOS development. While there are workarounds, they all have enough restrictions and drawbacks that they don't seem viable. Some of the other advantages of sticking with Apple are:

Macbook Pros are due for an update, and I can only hope that the changes will restore some sense of desire. When I got my first Mac, I checked the shipping status multiple times a day because I was so excited. If I stick with Apple now, it would be with great reluctance. The Apple magic isn't there anymore.

Continue the discussion on Hacker News, on Medium, or in the comments below.